Marfan syndrome has a dominant mode of inheritance. Most of these conditions are found in Black Wagyu. Conditions confined to Red Wagyu (Japanese Brown/Akaushi) are Haemophilia A and Bovine Chondrodysplastic Dwarfism.

Hereditary conditions in Wagyu outside Japan

Wagyu have been identified which are affected by, or are carriers of, the following known conditions in Australia:

The bleeding disorder in cattle with a light coat colour is caused by an autosomal recessive mutation which is caused by the substitution of a nucleotide on the LYST gene. There is also depressed immunity and the first sign is usually excessive bleeding from the umbilical cord at birth.

This condition in Black Wagyu is also called Renal Tubular Dysplasia and is a lethal autosomal recessive condition usually resulting in death by six years of age. Kidney failure and retarded growth are caused and can be associated with overgrown hooves and diarrhoea.

Low birth weight is followed by laboured breathing from moderate anaemia with spherocytosis, retarded growth and acidosis. It is lethal and death usually occurs within ten days after birth. If survival goes beyond that, adulthood is often reached despite retarded growth. A CGA to TGA substitution and Arg to Stop mutation is the cause of dominantly inherited spherocytosis.

The frequency of Spherocytosis mutant gene in Japan is 0.04. Foundation bull, and AI approved sire, JVP Yasutanisakura 931 (FB2102 and IMUFN2102) is the only known carrier of B3 to have been confirmed in Australia. As a carrier of B3, CL16 and F11, there are very low numbers of his progeny - 124 progeny have been registered by AWA (Australia). Several have died and none of his registered progeny were born after recessive testing commenced in Australia. However some of these progeny have bred and their progeny show a probability of 25% to be carriers of B3 in GeneProb. JVP Yasutanisakura 931 has 92 progeny registered by AWA (USA) of which 9% were born in 2010 but none have been registered subsequently.

variable body temperature, difficulty nursing, growth retardation, inability to stand unassisted and increased susceptibility to infection. Inseminations are repeated between 61 and 140 days due to embryonic or foetal deaths. The term of the pregnancy is often slightly extended and this suggests that the growth of the foetus is retarded when they survive through to birth. A mortality rate of more than one half of homozygous recessive (affected) embryos was reported by Hirano et al., 2016.
A random sample of 1,380 assays gave the mutant gene frequency (C frequency) of 0.070. In comparison, Australian Wagyu Association members have conducted approximately 90,000 genomics tests in the past three years. Analysis of the SNP on these genomics chips identified that the profiles of half of these contained the SNP that is used for determining IARS status. The mutation frequency is 0.089 and the incidence of carriers is 17.2%.

Table 1: The comparative results are shown in this table:

The typical 25:50:25 offspring ratio is expected when two heterozygotes (G/C) are joined. However, compared to the expected numbers, there were significantly fewer affected animals in this population (P<0.05), suggesting that more than half of the affected embryos died before birth. The frequency of re-insemination after more than 11,580 carrier over IARS carrier inseminations was significantly (P<0.001) higher between 61 and 140 days. The findings suggested that the homozygous IARS mutation not only causes calf death, but also embryonic or foetal death.

Results from GeneProb are posted on the Australian Wagyu Association website and the following Foundation sires have been identified to have a 99% probability of being Carriers: Fukutsuru J068, Haruki II, Itozurudoi TF151, Kikutsurudoi TF146, Kitateruyasudoi "003" and JVP Yasutanisakura 931.

It is anticipated that the number of IARS carriers in most herds is between 15 and 20%. It could be higher if ancestors that have IARS have been used more heavily. In a herd with a frequency of IARS carriers of 17% - as indicated in Australia - in the first generation of random mating, 83.7% of the offspring will be Free, 15.6% will be Carriers and 0.7% will be Affected. More than half of the Affected progeny are expected to succumb to IARS.

However when an IARS carrier bull is used over IARS carrier cows, 25% of the progeny will be affected and so overall mortality rate in that herd is expected to be around 15%. By testing individuals that are known to descend from the original Founder carriers, the carriers in today’s herds can be identified and the mating of carriers can be prevented.The Red Wagyu/Akaushi founders are considered to be untested free of IARS, but some progeny from Free Red Wagyu/Akaushi have been tested to be IARS Carriers after joining with Black Wagyu IARS Carriers. Testing of progeny from a Carrier is recommended.

Probability results for IARS and the other known recessive conditions are presented in tables at the end of this page.

Subsequent to the identification that the IARS disorder (specifically the isoleucyl-tRNA synthetase c.235G>C mutation) as one of the causes of weak calf syndrome in Japan, calf deaths differing from those attributed to IARS disorder have been occurring. Research has commenced with bulls that do not carry the IARS mutation but nevertheless have high calf mortality rates. In one trial reported by Takashi Hirano in 2017, it is suggested that the incidence of calf death in calves sired by one bull was a hereditary disease exhibiting a dominant, not recessive, inheritance pattern. This work is ongoing.

More detail on IARS Disorder can be viewed by clicking here.

Factor XI deficiency was documented in Holsteins in 1969. Affected animals take a longer time for blood to coagulate after injury or there is bleeding that doesn't stop from the umbilical cord after birth. Blood has been observed in cow's milk and this led to the diagnosis of this condition in Europe. The blood coagulation effect was found to be severe in affected homozygotes and partially deficient in heterozygote carriers. Reports from 1995 suggested effects on reproductive performance with a 50% greater incidence of repeat breeding of affected animals. A 76-base insertion mutation to exon 12 of the F11 gene is the cause. A heterozygote cow was the first Holstein to be isolated with the condition in Japan.

Factor XI deficiency is encountered in Wagyu and Holstein. There are some similarities in the clinical symptoms in the breeds. The causative insertion mutations are on different locations of the F11 gene and these variations are considered to be responsible for the differences in severity between the breeds.

Factor XI deficiency in Wagyu has an autosomal recessive mode of inheritance and is caused by an insertion of 15 nucleotides in exon 9 of the F11 gene. Frequencies of the mutated gene were found to be 26.4% from a random sample in Japan. Even though the number of carriers that are detected in testing exceeds this proportion in Australia, most tests that have been carried out currently are confined to high risk animals that are idrntified through GeneProb. It is not considered by Wagyu International that the incidence in Australia is any higher than the initial 30% when the foundation animals were first tested.

In Australia there was renewed interest in F11 when AWA presented a talk on it but no new data was provided. There are many factors involved in fertility but it would be comforting to know if iF11 is Wagyu has any effect as it is present in 30% of the herd and is more prevalent in higher marbling lines.

A table has been prepared to show the recessive status of the Wagyu Founder sires:

A - Determined to be homozygous Affected with two mutant genes from testing.
C - Determined to be heterozygote Carrier with one mutant gene from testing.
F - Tested to be free.
U - Untested, but based on pedigree is expected to be free.
% - The chance that an animal may be a carrier. Untested, but based on pedigree. The higher the percentage, the higher the probability that the animal is a carrier. 99% probability is the maximum.

The probability that the following Foundations have recessive conditions is tabled: 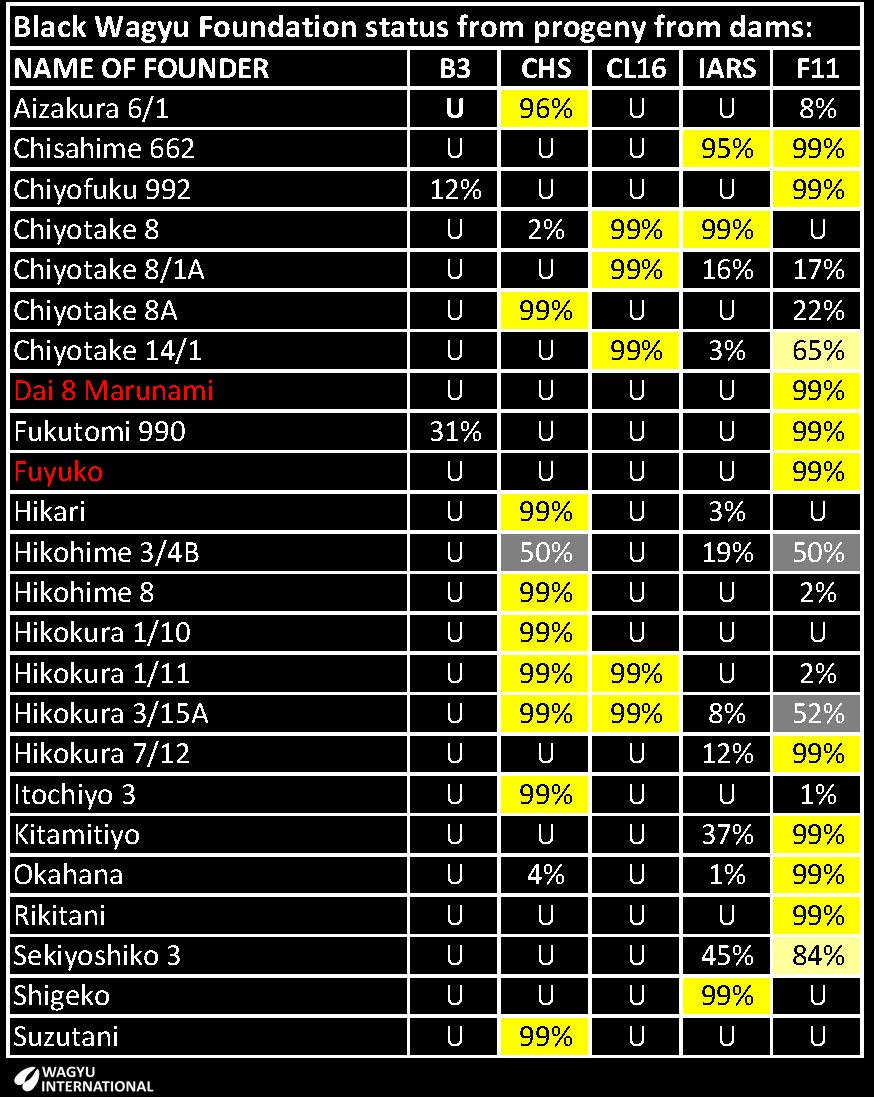 A few high performers are carriers of hereditary conditions and the heavy use of artificial insemination and line breeding has resulted in the spread of some of these conditions from foundation animals. Carriers were exported from Japan and then on to other countries before their recessive genetic status was known. A table showing results from tests of Foundation animals up to 26th February 2011 is on the American Wagyu Association website.

Now that these conditions have been recognised and carriers and affected animals have been identified, related animals that may be at risk can be tested and identified too. It is becoming standard practice for all breeding animals to be tested before they or their genetics is offered for sale or export.

GeneProb software applies the results from tests across the pedigree database and the probabilities that animals are carrying any of the four genetic conditions is available. At-risk animals can be identified and decisions can be made to see if any further testing is required. When an animal has a probability of 50% or higher for one condition, it has at least one parent that has been tested to be a carrier of that condition, or else one of their progeny has been found to be a carrier. Previously this information was only available on a herd by herd basis.

Carriers with superior breeding can be retained but they should not be mated to other carriers. Their progeny that are tested to be free can be safely retained for breeding or sale.

Test results are displayed in the American and Australian Wagyu Association webpages. This table shows test results and probabilities for Wagyu animals that are advertised in the public domain for export. Contact the owner for the current status as not all test results have been declared. 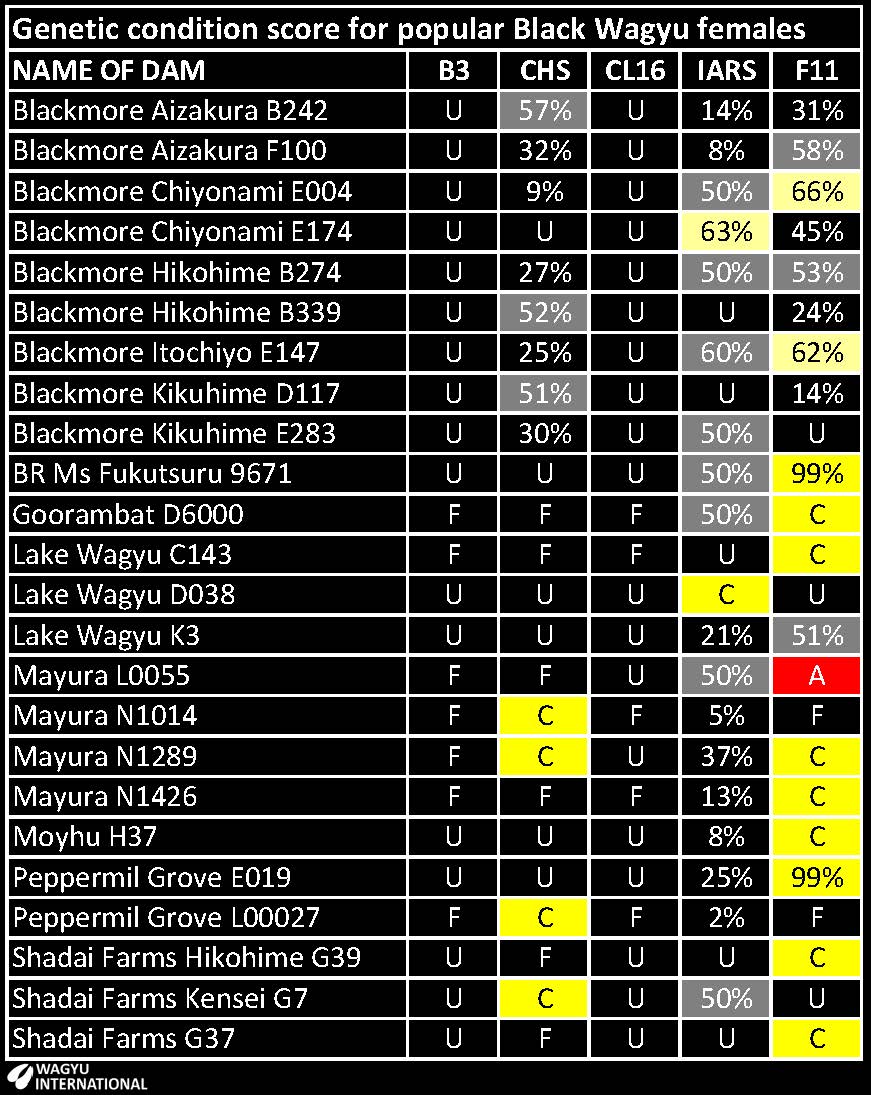 C - Determined to be heterozygote Carrier from testing.
F - Tested to be free.
U - Untested but based on pedigree is expected to be free.
% - The chance that an animal may be a carrier. Untested, but based on pedigree. The higher the percentage, the higher the probability that the animal is a carrier. 50% indicates that one parent is likely to be a carrier. Contact the breeder for unpublished results when a percentage is displayed from GeneProb - especially when it is 50% or higher.

Wagyu International provides information that has been supplied by other parties and gives no warranty (express or implied) as to the data completeness, accuracy or fitness for a particular purpose.

Please inform the webmaster if recent test results have been obtained.